Previous versions of KSE had some basic CA features like signing X.509 certificates, key creation, PKCS#10 requests, support for many X.509 extensions, extension profiles, but revokating certificates by creating/signing a certificate revocation list (CRL) has been missing so far.

This has changed in version 5.5.0. In the context menu of key pair entries is now a new item called "Sign CRL", which opens the dialog on the right. 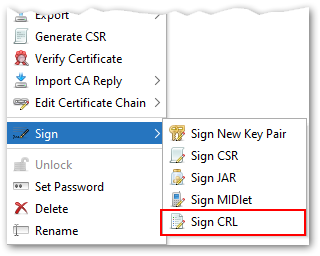 Certificates can be added to the CRL in three ways:

The generated CRL can then be saved to the file system in PEM or DER format.

The feature uses an automatically created file with the issuer serial number as its name and ".db" as its extension to save meta data like CRL serial number, the revoked certificates and the validity period. This makes creating subsequent CRLs much easier. 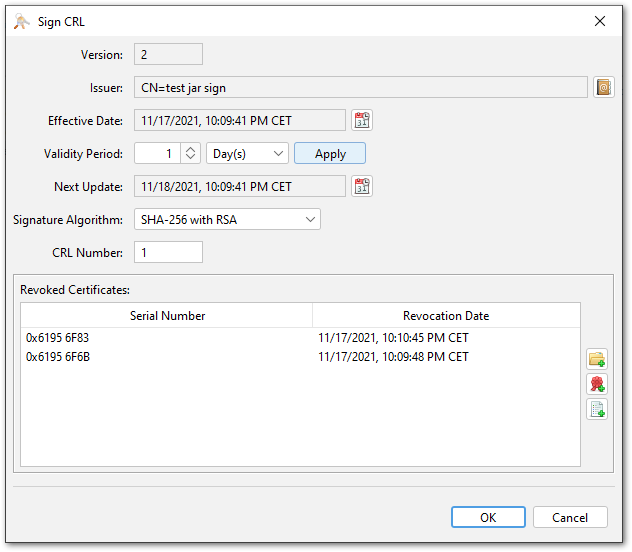 KSE can now do a certificate validation - including a check of the revocation status with four different methods. 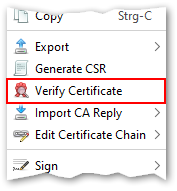 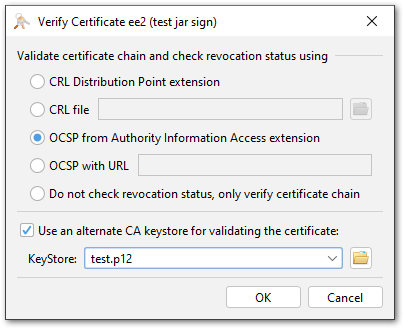 Support for the (twisted) Edwards curves has been added. This includes key generation and EdDSA signature scheme:

Choosing an elliptic curve that is both secure and efficient has not been easy in the past. The Edwards curves are therefore a useful addition to KSE. 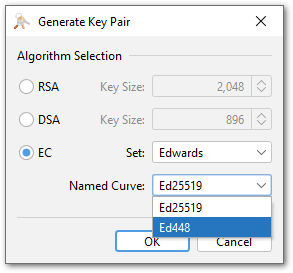 In contrast to the older PKCS#1 v1.5 signature scheme the Probabilistic Signature Scheme (PSS) from PKCS#1 v2.1 is provably secure. This does not mean that the v1.5 scheme is unsecure, but PSS should be preferred if possible.

The PSS versions of the signature algorithms can be recognized by the appended "and MGF1": 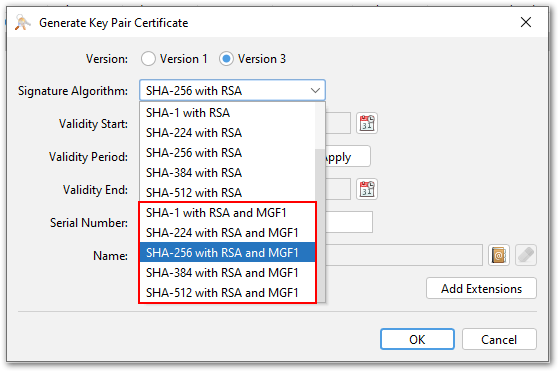 The CRL Distribution Points (CDP) extension is one of the standard certificate extensions from RFC 5280. With KSE being able to create CRLs, this extension is even more relevant now. 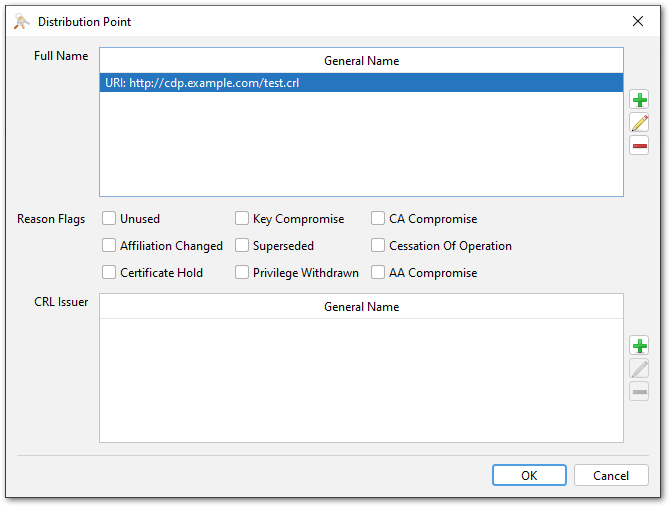 When generating a certificate with KSE, a wide range of commonly used certificate extensions can be added. There are however some exotic or non-public extensions that are completely out of scope for a tool like KSE. With this new feature any extension can be added to a new certificate by entering the object ID (OID) of the extension and the value as a hex encoded string.

The value has to be entered as the hexadecimal encoding of the DER-encoded ASN.1 value of the extension without the encapsulating OCTET STRING tag and length bytes.

This is definitely a feature for advanced users who know what they are doing, but it has been repeatedly requested. 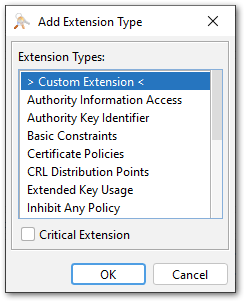 The first three were added by Jairo Graterón. 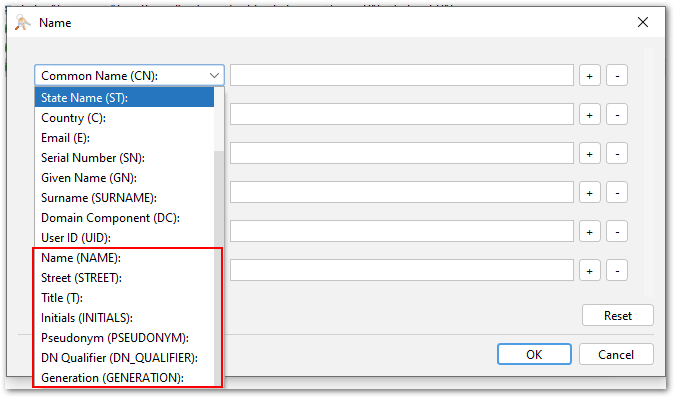 With KSE 5.5.0 it is now possible to sign multiple jar files at once.

The browse button now opens a file chooser dialog that allows to select multiple files. Next to the button is an indicator showing the number of selected files.

As before it is possible to either replace the original jar file with the signed one or create a new file. In the latter case the file name of the signed jar is created by adding a prefix and/or a suffix. The suffix is added before the file extension.

This feature was contributed by Colbix. 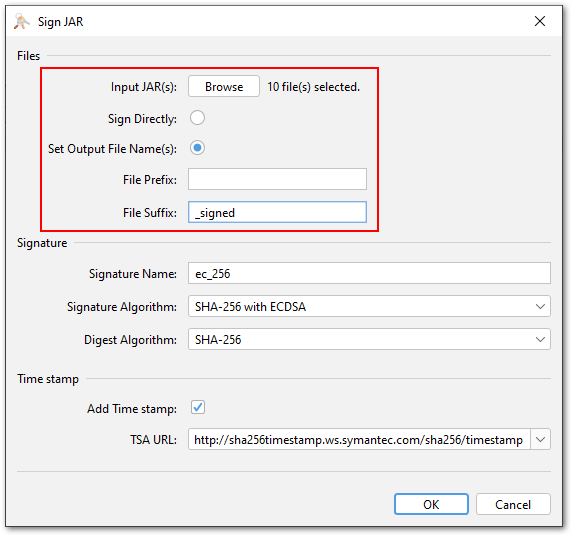 You can now search the current keystore.

The keyboard shortcut for "Examine File" (Ctrl-F) has been changed to Ctrl-E in KSE 5.5.0 so that the more intuitive Ctrl-F can be used for this new find feature. 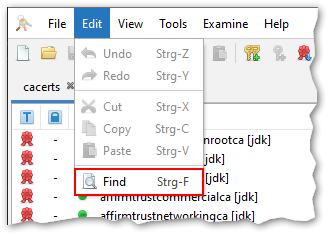 Every keystore entry with a matching name is selected after the search was executed. The number of selected entries has been added to the status bar, which gives an overview of the search result, which is useful if not all found entries fit into the window. 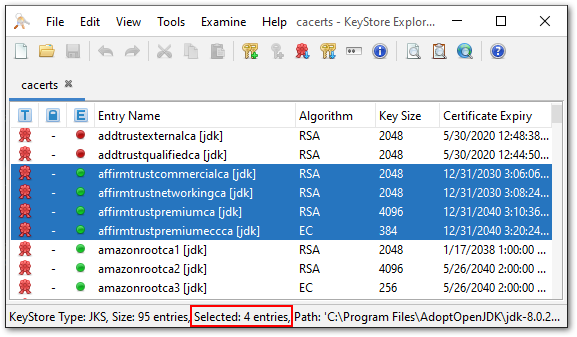 OIDs are hard to remember and it is easy to make mistakes when entering them.

Wherever in KSE where you can enter OIDs, this new feature makes suggestions that you can select from a drop down list. Of course - if none of the suggestions should match, you can still enter another OID just like before.

This new feature allows to create a Diffie-Hellman (DH) key exchange parameters PEM file that can be used for example in OpenVPN.

The Java implementation of the DH parameter generation is pretty slow, so especially for key sizes above 2048 OpenSSL is still the better tool for this task.

This feature was contributed by Colbix. 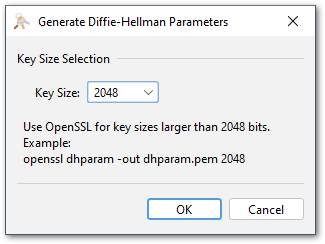 KSE 5.5.0 comes with a completely new launcher executable for Windows. It was written especially for KSE and uses Bill Stewart's JavaInfo.dll for detecting Java installations.

The launcher searches for Java in the following locations in exactly this order:

The Windows installer for KSE is now made with InnoSetup and comes with the following improvements:

Also, there are two versions of the Windows installer now: 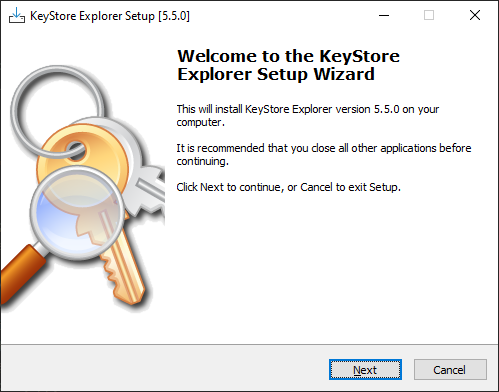