This release fixes the following bugs:

This release includes the following bug fixes and enhancements:

In older versions of KSE the dialog for entering the Distinguished Name (DN) had a strict scheme of 7 commonly used name components (CN, OU, O, L, ST, C, E) in the commonly accepted order. It was not possible to use other name components like for instance SerialNumber (SN). Also, it was not possible to create a DN with more than one occurrence of the same attribute (especially OU is often used more than once in a DN).

The new DN chooser dialog allows to add and remove RDNs (relative distinguished names) at any position by clicking on the "+" and "-" buttons. For every RDN you can select one of the following name components:

The new DN chooser dialog defaults to almost the same scheme as before (CN, OU, O, L, ST, C) with only email address removed (according to RFC 5280 it belongs in the SubjectAlternativeName extension). 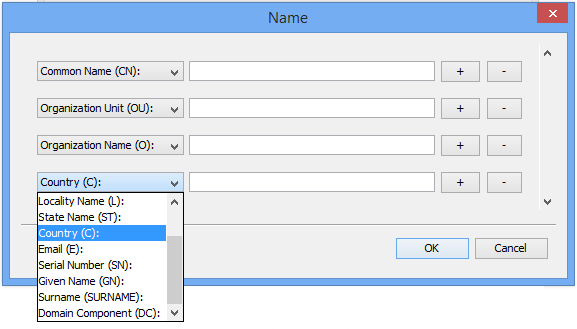 The validity of a certificate generated by KSE used to start at the point of time when it was issued. The certificate generation dialog only provided a setting for a validity period in years, months, weeks or days and the validity end date was calculated by adding this period to the current date and time. Most of the times this is sufficient. However, there are scenarios where it is necessary to create a certificate with a notBefore that lies in the past or in the future.

The validity start defaults to the current date and time. Therefore the old behavior can now be achieved by selecting the wanted amount of years/months/weeks/days like before and then clicking the apply button. This sets the end date accordingly.

This new feature is a contribution by Michele Mariotti. 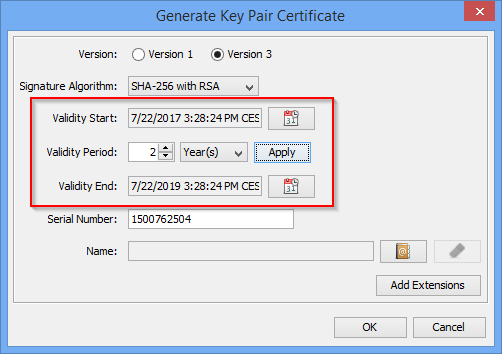